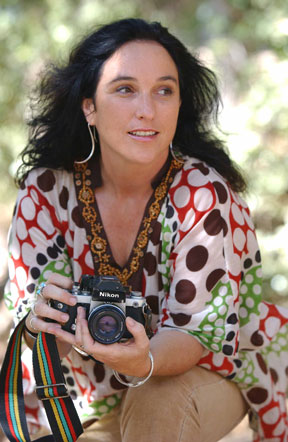 Cary Sullivan is a multi-talented producer, talent buyer and photographer who has run the gamut of the culture, music & art landscape from coordinating festivals in Africa to producing progressive radio in Los Angeles. Cary, along with partners Rocky Dawuni and Jeremy Sole currently promote a weekly nightclub / happening at Zanzibar called Afro Funke' which has been going strong for over 9 years. Cary Sullivan's photographs have been used in the cutting edge series of flyers that have promoted Afro Funke' since its inception. Cary shot these photographs over many years traveling throughout West Africa with a focus on Ghana.

Cary has been a featured photographer in a variety of group photography shows around Los Angeles as well as a number of solo shows including Create:Fixate, Art Share, Julia Dean Studios, Submerged Gallery, MOMAI  and G2. Cary displayed work with her NGO Africa Live! and its collaborative projects with UNICEF and the Carter Center which focus on the crucial water and sanitation issues plaguing Northern Ghana at Electric Lodge in Venice. Cary just launched a solo exhibition entitled “Soul Adventurer” at the Dan Eldon Gallery at Creative Visions Foundation in Malibu, CA that will be up until January 7, 2013.

Cary also co-owns and operates AQUARIAN Records, which is a record label and production company dedicated to bringing the eclectic culture of Ghana to the world through music, videos, live concerts, photography, documentaries, and television. AQUARIAN’s primary artist is Ghanaian Reggae star, Rocky Dawuni, who recently released his 5th studio album “Hymns for the Rebel Soul” which is currently taking the world by storm!

Africa LIVE! is an off shoot of AQUARIAN Records, is a nonprofit organization that strives to restore, preserve and reinvigorate the live music scene in Ghana by providing artists and venues access to high quality musical and sound equipment, as well as professional production assistance. Africa LIVE! seeks to explore and develop traditional West African music into a resource for community development, advancement and export as well as to engender music production and consumption as a means of socio-economic growth in Ghana. Africa Live! produces "Rocky Dawuni's Independence Splash" which had it’s 11th annual event in Tamale, Ghana at the 20,000 capacity Tamale Sports Stadium on March 19, 2011. Thousands of fans were dazzled by Dawuni and his 12-piece band; ensuring the roots reggae musician a triumphant return to his ancestral home land of Northern Ghana. The annual festival, founded by Dawuni, is a musical celebration of the independence of Africa from colonial rule.

Cary curates and co-produces periodic one off shows and series for KCRW including last year’s “Are Friends Eclectic Evening?” at the Orpheum Theatre and “KCRW’s Conversations Through Music” events. Previously, she co-produced eight world music events at Westfield Century Citydubbed“World Music on the Terrace” featuring exciting artists such as Keziah Jones (Nigeria) and Locos Por Juana (South America) plus various KCRW DJs.

Cary was formerly the talent buyer for three of LA's favorite live music and DJ venues: Temple Bar, Zanzibar, and Little Temple. Cary also previously curated the Cafe Z free music series every Saturday at the Skirball Cultural Center, which ran from May through October and featured eclectic live music from all over the world.  She produced the award winning National Public Radio (NPR) program, "Chocolate City," on KCRW 89.9 FM in Los Angeles with Garth Trinidad for five years through its seminal 5 nights a week run (1999-2004) that changed the face of underground urban music in Los Angeles.
www.facebook.com/afrofunke
www.myspace.com/carysullivan
www.rockydawuni.com